The return of the Holiday Season means that Christmas Carols and songs are a hot commodity, but when and where did this tradition begin? 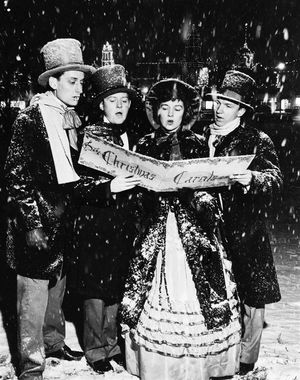 Carols were first sung in Europe thousands of years ago, but these were not Christmas Carols. Carols were originally pagan songs, sung at the Winter Solstice celebrations such as would occur at Stonehenge and other prehistoric sites. The word “carol” actually means dance or a song of praise and joy, and carols were originally sung during all four seasons.

Christmas, as a Christian celebration of the birth of Jesus, evolved to be celebrated at the same time as the winter solstice, and the early Christians began singing Christian songs instead of pagan ones. In 129 AD, a Roman Bishop said that a song called "Angel's Hymn" should be sung at a Christmas service in Rome. Another famous early Christmas Hymn was written in 760 AD by Comas of Jerusalem, for the Greek Orthodox Church. Soon after this many composers all over Europe started to write “Christmas carols”. These songs had limited popularity as they were all written and sung in Latin, a language that the common people couldn't understand. By the time of the Middle Ages (the 1200’s), most people had lost interest in celebrating Christmas altogether.

This was changed by St. Francis of Assisi who, in 1223, started his Nativity Plays in Italy. The characters in the plays sang songs or 'canticles' that relayed the story during the plays. These new carols were often in a language that the listeners could understand and sing along with, and these new carols soon spread to France, Spain, Germany and other European countries.

The earliest carol of this type was written in 1410. The carol was about Mary and Jesus meeting different people in Bethlehem. Most of the carols from this time and the later Elizabethan period are made up stories, loosely based on the Christmas story about the Holy Family, and were seen as entertaining rather than religious in nature and these songs were usually sung in homes rather than in churches. When the Puritans came to power in England in 1640’s, the celebration of Christmas and the singing of carols was temporarily stopped, but the carols themselves survived as people still sang them together in secret. Carols enjoyed a renaissance in Victorian times and at that time many local carols were collected from local villages in England.

Carols gained further popularity after the Reformation in the countries where Protestant churches gained prominence, as well-known Reformers like Martin Luther wrote carols and encouraged their use in worship.

The communal tradition of “caroling” as a social celebration dates back to the 13th century. It began in the oral tradition and didn't always involve Christmas or even singing. In its earliest days, wassailing involved people going house to house giving out well wishes during the colder months.

It would later become a tradition to sing carols after the Christmas meal. The first carol service is believed to have been held in England at the Truro Cathedral, Cornwall, in 1880. (Fans of Poldark will be familiar with this!) The publication of Christmas music books in the 19th century further helped to widen the popular appeal of carols.

Traditional carols have often been based on medieval chord patterns, and this helps to establish their characteristic musical sound. Some carols, like "Good King Wenceslas” and “The Holly and the Ivy" can be traced directly back to the Middle Ages and are among the oldest musical compositions still regularly sung.

Today, the difference between Christmas carols and Christmas songs has become rather amorphous. With 50 million copies sold, Bing Cosby’s performance of “White Christmas” has not only become the best-selling Christmas song of all time, it is also the all-time best-selling single according to Guinness World Records. 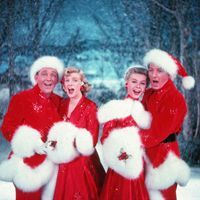 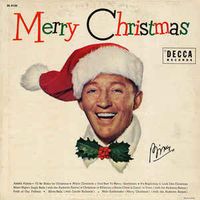 The song has a fascinating backstory: It first aired during the Kraft Music Hall radio show on December 25, 1941. Bing Cosby was the host of the show and, as he crooned the soulful, longing, and melancholy carol, Pearl Harbor had just been attacked by the Japanese a few weeks before on December 7, 1941.

The song itself had been written by Irving Berlin, a Russian-born immigrant who was Jewish and who did not, himself, celebrate Christmas. Berlin's three-week-old son had previously died on Christmas day in 1928, and every year thereafter on December 25, he and his wife visited their baby's grave. It is easy to wonder whether this experience helped to provide some of the emotional power and authenticity that is so moving in this Christmas classic. 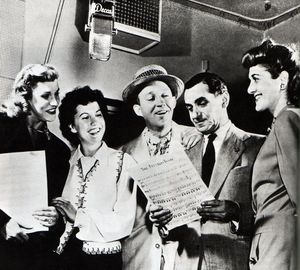 "White Christmas" was originally written for a musical that eventually morphed into the movie Holiday Inn and which ended up winning an Academy Award for the song. In 1954, it became the title track of another Bing Crosby Christmas musical, White Christmas.

From the sublime to the silly, the Holiday Season has a number of quirky traditions, such as Ugly Christmas Sweaters and Light Up Antlers, but perhaps none more unusual than the Christmas Pickle. 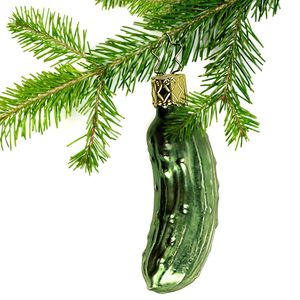 In the 1880s Woolworth stores started selling glass ornaments imported from Germany shaped in the form of various fruit and vegetables, including pickles. Contemporaneously, it was fabulously claimed that the Christmas Pickle was a very old German tradition and that the pickle was the last ornament hung on the Christmas tree and that the first child to find the pickle got an extra present.

There are two other rather far-fetched stories, worthy of The National Enquirer, which link the pickle to Christmas:

One features a fighter in the American Civil War who was born in Bavaria. He was a starving prisoner who begged a guard for one last pickle before he died. The guard took pity on him and gave a pickle to him. The pickle gave him the mental and physical strength to live on!

The other story is linked to St. Nicholas and is a tale of two Spanish boys traveling home from a boarding school for the holidays. When they stopped at an inn for the night, the evil innkeeper killed the boys and put them in a pickle barrel. That evening, St. Nicholas stopped at the same inn, found the boys in the barrel, and miraculously bought them back to life!

The most likely explanation for Christmas Pickles? An enterprising salesman, with a lot of spare glass pickle ornaments to sell, probably invented the legend of the Christmas Pickle!

Despite these somewhat dubious origins, the city of Berrien Springs, MI (also known as the Christmas Pickle Capital of the World) has an annual pickle festival held during the early part of December.

As we turn our attention to the celebration of the spirit of the Holiday Season, Laurie and I are excited to share our new, original Holiday song: “Ho Ho Home Holidays” with you! The song is a celebration of the sights, sounds, smells and feel of the Holiday season. While creating the song we felt a strong feeling of warm nostalgia and we hope that you will have as much fun listening to the song as we did while creating it! Here is a link to where you can listen to and stream the song and, hopefully, add it to your own holiday playlist! 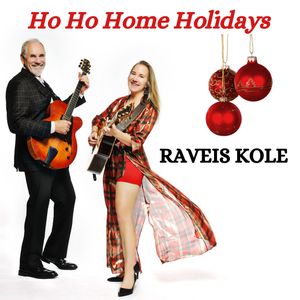 Please share our new song with your co-workers, friends & family!

As an extra treat, Laurie has created two Holiday Spotify playlists for you to enjoy! 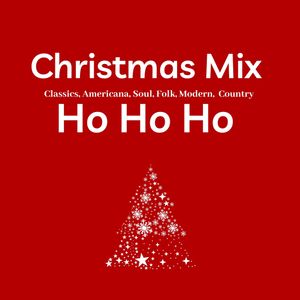 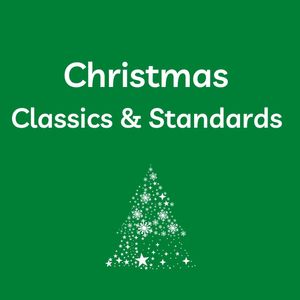 What is the cozy Christmas sound?  Look no further! Our favorite Christmas Classics, Standards and current day songs with the undeniable sound and feel of the holiday season